Sticks & Stones Can Break a Bone

Fractures happen: Here’s how to help your body heal them 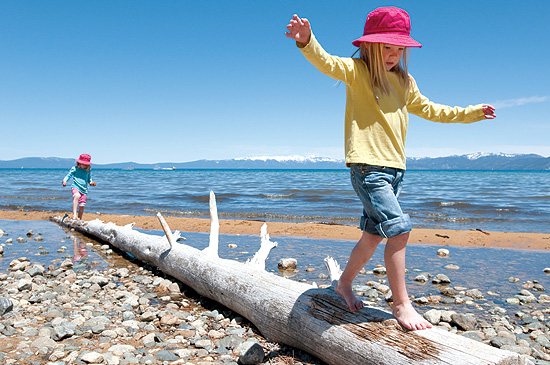 When my children were little, I decided to hire an au pair for one year. My youngest was one, the next was two, and the eldest was three and a half. The household was a bit nutty and my husband was traveling a lot—teaching homeopathy! I felt that with another pair of hands around, my kids would get more attention and care, and I would be able to enjoy motherhood a bit more.

When our 20-year-old Austrian gal arrived, we were happy to welcome her into our family. That very first day we gathered the troops and headed to the local playground. Up and down slides, pushing kids on the swings, drawing with sticks in the sandbox—we were having a fun afternoon! My three-year-old daughter loved the zip glide she had recently mastered—grasping the small handle with both hands, holding on tightly with her legs dangling, and then zipping along a structure about four feet off the ground. With a bit of a push, off she’d go, screaming “wheeeee,” as she sped along the track.

My two-year-old son was entranced. He was not yet strong enough to hold on all the way across, but he sure wanted to grip that little handle too and have one of us grab him around the middle and run with him along the length of the glide. The au pair must not have noticed that I’d been holding onto him as we zipped along; she put him up on the glide and gave him one good shove. I saw him holding on just as long as those little fingers could grasp. To my horror, as he lost his grip, that chubby toddler went flailing and cascading to the ground into a broken heap. He starting wailing—more than usual for him—and holding the bottom of his leg yelling, “Owie!”

I had some Arnica handy and gave him a dose right there—if memory serves, it was a 200c. He quieted down a bit after that, but he wanted to be carried and refused to put weight on that leg. We all went home and had dinner, then it was bath time and off to bed.

When we showed up at the ER the next day (as he still wouldn’t put weight on the leg), the doctor on duty assured us there was no way it could be broken because there was not a bit of swelling—no bruising, no nothing. Ah, the miracle of Arnica! It can work wonders on trauma to soft tissues! 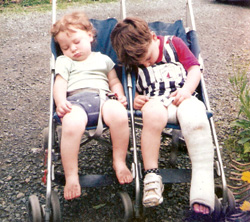 But I knew my kid and knew that if a bone was not broken, he would be running around and playing and getting into mischief. So I persisted in asking for an X-ray, and sure enough, it showed an oblique (diagonal) fracture of his fibula (shin bone). That poor au pair felt like a real failure her first day in America.

My son wore a cast for a month, the leg in a slight bend at the knee. He crawled for a few days and then found a way to walk with a limping gait. After a couple more days, he was running around keeping up with his older sister and being crawled after by his little brother, as if his leg had no heavy, awkward cast all the way up to his groin.

Almost all broken bones, when correctly assessed and set, will heal up just fine. The human body is beautifully outfitted to create and lay down new and healthy bone, provided there is adequate nutrition and absorption of nutrients. Right near the break, the healthy bone will start to manufacture different kinds of cells to promote healing. Osteoclasts will take away tiny bits of bone at the site and reabsorb the calcium salts into the blood. Osteoblasts will mobilize substances to actually do the repair of knitting the bone together.

Typical healing time is about 6 weeks, but some bones do take longer. Those that have less circulation to them, such as the neck of the femur (thigh bone) and the inferior aspect of the tibia (ankle portion of the large leg bone) can take a bit more time. It’s important to note that healing a fracture can take considerably longer in people who smoke; the compromised circulation of smokers is to blame and can greatly affect not only the length of time but also the quality of the bone healing.

Because most fractures heal well and cause few symptoms once the bones are set and cast, in most cases, no homeopathic remedy may be indicated at all. When patients already under my care ask me for help in healing a simple fracture, I will usually give a dose of their constitutional remedy, to optimize their health and healing in general. This is how I treated my son; he received a dose of his constitutional remedy a few days after the bone was set.

For those who need more specialized help with a fracture, I address it as I would any homeopathic case. That is, I take a full history of their current complaint and aim to understand it in the context of the whole person. I pay close attention to symptoms of the fracture but also to mental and emotional symptoms and physical general symptoms such as body temperature, food desires, thirst, temperament, etc. Often it is these general symptoms that will point me to a helpful homeopathic remedy.

The main thing that I will add routinely for a person with a fracture is a high potency multiple vitamin-mineral. So very many nutrients are needed for healing—including Vitamins A, E, C, K, magnesium, zinc, iron, and copper—that I like to cover my bases. If I have any reason to think a person has a deficient diet, due to lack of knowledge, eating disorders, compromised access to healthy food, or difficulties absorbing nutrients (perhaps from mal-absorption syndromes, inflammatory bowel disease, cystic fibrosis, or other causes), I will give additional guidelines on diet and ­supplementation. Proper nutritional intake and absorption are key to timely and complete bone healing.

One example of someone who needed extra bone healing help was “Drew,” an 18-year-old college athlete with a Jones fracture in his right foot. This is a side-to-side break of the most outside metatarsal bone, near the base of the small toe where blood flow is not optimal. After six weeks of being in a cast and using crutches so he was bearing no weight on the fracture, Drew had minimal pain but inadequate healing. His orthopedic doctor suggested surgery to put a pin in place, because Jones fractures that don’t unite, as in Drew’s case, can be very difficult to heal. Without surgery, they could take 5 months or longer, and an estimated 25% become chronic problems that don’t heal at all.

But Drew did not want a pin surgically placed in his foot, so he came to me seeking an alternative. I took his full homeopathic case. Beyond the failure for the bone to knit, he (and his mother) complained of his unusual irritability and crankiness, not typical for this young man. He reported being easily frustrated with everything and everyone, especially himself, and restless and short-tempered. I gave him a dose of Calcarea phosphorica 12c to take daily, figuring it might help both stimulate bone growth and help his mood, since non-union of fractures and an irritable mood are key indications for this remedy. Three weeks later, the fracture showed good signs of healing and Drew was out of the cast and starting on physical therapy. His mood reverted to his more even-tempered self. He took his rehabilitation and physical therapy seriously and went on to have a successful career playing his beloved college basketball. Thanks to homeopathy, he had recovered completely and avoided surgery, too.

So what happened with my son’s fracture? When his cast came off, the whole leg had withered quite a bit (as is often the case after casting), and he did not seem to want to walk on it at all. When he did, he would only walk on the tippy toes of that foot.

We were at a lakefront beach a few days later, and I figured, let’s get him in the water splashing and kicking around. After playing and paddling around with his ­sister and brother for awhile, he walked right out of that lake as if his body had forgotten that it had ever had a broken part. The withered leg caught up to the other one within a week. I’m happy to say, my son is now a robust, 20-year-old scholar and college athlete, over six feet tall, with big strong bones indeed!

Thank you to the National Center for Homeopathy for their permission for us to re-print this article from their Summer 2011 issue of Homepathy Today. For more information about membership to the NCH or subscribing to their publication, you can contact them at:

This email address is being protected from spambots. You need JavaScript enabled to view it.